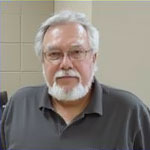 John has been an aviation professional since 1974 with over 20,000 hours accumulated flight time as a flight instructor and charter pilot.  He has served as a Designated Pilot Examiner, Chief Pilot for an FAR Part 135 Charter Flight Operation, and recently retired as Chief Flight Instructor for the South Dakota State University Aviation FAR Part 141 Flight Training Program. John wrote and implemented curricula for several FAR Part 135 and 141 programs.  He developed and owns an FAA Part 145 Certified Repair Station for repair of Cessna Aircraft Rudder Pedals.  He has PMA (Parts Manufacturing Approval) authorization to manufacture replacement Rudder Pedals for Cessna Aircraft.  John holds an Airframe and Power Plant Mechanic Certificate with Inspector Authorization privileges, an ATP Single and Multi-Engine Certificate, a Helicopter and Glider Commercial Certificate, and Flight Instructor Certificates for helicopter, glider, single and multi-engine airplanes.  He developed a seminar focused on critical thinking skills called “Survivability and Common Sense,” which has been presented at various FAA safety seminars. John has been a member of SDPA since March 2003, and served as secretary in 2006, vice president 2007-2010, President 2011-2014, vice president 2015-2018.

Bobbie was born in Potter County, SD, and lived all his life in SD. His first interest in flying was a big tree behind his folks house. He had to give up that type of flying because his folks thought he would fall out of the tree and kill himself. In 1969 he went to work for Nauman Flying Service and got his license in 1972. He learned to fly in a Super Cub. He took his instrument time in a 150 Cessna. He's also flown a 172 Cessna, a 182 Cessna, an Aeronca, a Piper Pawnee, and a 250 Piper Comanche. His biggest accomplishment was starting SDPA in 1993 with about 23 members, with the help of several other people. Our membership at the present time is 396 as of December 3, 2018. Bobbie was SDPA President 1993-1996 and 2003-2006, District 1 Director 2007-2018. 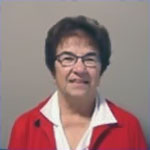 Mary Carol (Robideau) Potts was born in Highmore and raised on a farm in Hyde County. She had five brothers. She has two daughters, Jennifer and Vicki. Mary Carol has been around aviation many years. She likes to fly and has enjoyed rides in a variety of airplanes. Mary Carol is a charter member of the SDPA since 1993 and has been the only treasurer for the organization. She's also treasurer for the Potter Tractor Pullers Assn., secretary for the Potter County Historical Association, and Historian for the local Eastern Star Chapter. At present she and a partner paint for homeowners, businesses, and other entities. 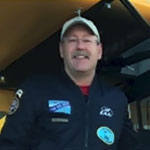 Dale grew up in the Sandhills of Nebraska and graduated from Valentine Rural High School, Valentine, NE. Dale was introduced to aviation at a young age as his father, Dan, was a pilot and used his “Champ” to check cows and windmills on the ranch. Dale took every opportunity to go along and learn to fly. Dale's grandfather, uncle, and cousin also were pilots. Dale earned his private pilot certificate in June, 1993. Family life took priority for a few years so not a lot of flying was done until 2015 when he purchased a 1952 Cessna 170B. He continues to fly as much as possible and has over 500 hours in it since the purchase. Dale has also owned a Rans S6-S, which was purchased for the purpose of getting more hours for his son, Dean, who is the 4th generation pilot of the Knuth family. Dean is pursuing a professional career as a pilot. Dale and his wife, Glenda, have three children and one grandchild. Dale is a member of EAA Young Eagles Program and has given over 100 kids a ride in his Cessna. He also is a member of AOPA. He loves flying and jumps at the chance to get behind the controls of any airplane he can. Dale has served in the Army, Nebraska National Guard, and South Dakota National Guard from 1985-1992. Dale has been a member of the SDPA since October 2015 and became a Lifetime in October 2019. 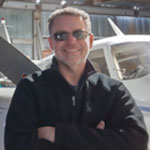 Bob has lived in Pierre the majority of his life. While growing up he recalls catching the flight bug around the age of 6 on a flight in the co-pilot seat of a Piper Navajo piloted by Bernie Christensen, who was a friend of his grandfather and father. Bob’s father was in the USAF, grandfather a Navigator in the Air Corps of WWII, and great-grandfather a GA pilot. Bob took an introductory flight in a Cesena 150 in 2010. He resumed training in 2015 from Wright Brothers in Mitchell while he was overseeing Fischer Rounds Real Estate in both Mitchell and Pierre. Bob passed his checkride in 2016 with DPE John Barney. With new certificate in hand, Bob and a local instructor flew to Tennessee to pick up a 1967 Cherokee 235 that was once owned by Hugh Downs. The 235 provided many hours of commutes and adventures for Bob and his wife to towns in SD, Colorado, Kentucky, and Arizona to see family and friends. Bob sold his Cherokee in 2018. He went to Riggin Flight School in Madison and earned his multi-engine rating. In 2019, Bob bought his current plane, a 1964 Twin Comanche with Robertson STOL kit. He earned his IFR rating in the Twin with the help of Morris Riggin and Heidi Stoeppler in 2020. The Twin gets him and his wife all those places mentioned above, plus a few more, just a little quicker. Bob joined the SDPA in February 2020 as a LifeTime Member. 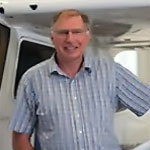 Harvey grew up on a farm and graduated from Willow Lake High School, Willow Lake, SD. He attended the University of South Dakota at Vermillion, then dental school in Minneapolis. Clark Family Dental Center was opened in 1976 in Clark, SD, and still practices dentistry four days a week. It was an introductory airplane ride certificate that his staff gave him that got him started flying in 2004 at age 55. Harvey travelled to Watertown for flight training in a Cessna 172, and later trained at Clark when the CFI flew the plane during the fall & winter. Harvey finished his training at Marshall, MN, and did his check ride there. In 2009 Harvey completed a mountain flying course in his Cessna 172 (180HP) put on in Denver by the Colorado Pilots Association. Each of the 15 students had an instructor, and flights were made to five high altitude airports in Colorado. Harvey used that experience to fly via Bozeman, MT, to visit his sister in Coeur d'Alene, ID. Harvey built a new hangar at Clark Airport in 2013 with a heated floor, and recently added a restroom and small kitchen to the hangar. Harvey has been a member of the SDPA since 2007. 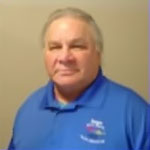 In his early teens, Dwayne worked as a flagger for aerial applicator George Grubbs at Rosebud Aviation in Gregory, SD. Dwayne's actual flying started with the purchase of a powered parachute (PPC) in 2002, eventually doing some PPC instructing. Using the Sport Pilot option to transition to fixed wing aircraft, Dwayne now flies a refurbished 1946 Aeronca Champ 7AC out of De Smet and the Northern Black Hills. LaFave was the first South Dakota aviator to visit all the SD airports with his “FLY South Dakota Airports!” Passport book in hand. LaFave's interest in aviation has roots prior to his birth, when his father Sam was with the Army Air Corps in WWII. Following WWII, Sam purchased a 1946 Taylorcraft and used his GI bill to join the fast-growing ranks of GA pilots. Dwayne's son Jeff began his flying as a De Smet High School student, by traveling to Brookings for instruction, earning his private license and instrument rating through the South Dakota State University aviation program. Retiring in 2016 after 45 years as a public school educator, LaFave will be spending more time pursuing his interests in aviation and music basing out of De Smet and the Black Hills. Dwayne has been a member of SDPA since September 2003. 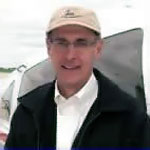 George took a couple of lessons when he was 15 in a J-3 on a grass strip in PA, and then took a break for over 20 years before starting again in Mitchell, SD. He had his first and only engine failure on a descent into Storm Lake, IA, during his fourth flying lesson (4.1 hours total time). Luckily, there was a safe landing in a soybean field, by the instructor, no damage to the plane or crew. George earned his private pilot license in 1986, his instrument rating in 1994, and commercial rating in 2019. George is a funeral director in Mitchell and also the Davison and Hanson County Coroner. He has been a member of the Mitchell Municipal Airport Board since 2001. A member of AOPA and EAA, he joined the South Dakota Pilots Association because of their efforts promoting general aviation in SD. George has really enjoyed his time as District 4 Director and getting to know other pilots. George has been a member of SDPA since January 1998. 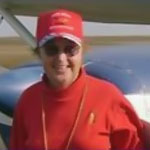 Born in Philip, SD, in 1943. Married in 1961 to lifetime partner, Bill, two daughter, Shelley and Sandra; legal secretary 12 years in Rapid City, returned to farm / ranch with family in 1975. Lifetime member of SD Farmers Union. Raised hogs for 20 years, got a plane in 1988, license in 1989. Member of SD Civil Air Patrol for 22 years of which she was the commander of Philip Composite Squadron for 16 years – reaching the rank of captain. Haakon County Commissioner 8 years, served on the SD Pork Producers Board, 8 years. Managed the family farm from 1978-2004. Write a weekly news column for Pioneer Review newspaper. Went from a C-150 to a C-172, which was used for meetings, farm business, and pleasure. Marsha has been a member of SDPA since July 2003, and served as Director for District 5 since July 2003. 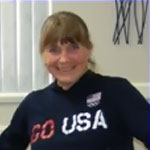 After retiring from teaching after 37 years, I am still subbing -- so I passed the 45 year mark in education – and I'm still getting educated! Teaching has really changed since 1972…all a person needs is thumbs! Haven't gotten back to flying, but continue to ‘barnstorm' on a daily basis, pulling hay out of the barn to feed my three horses, sometimes in a storm! Enjoy getting together with the other SDPA members, however, and wish I could contribute more to the association via flying experience. But I hope to explore more remote and unusual airports however I get there so I can share some fun experiences in the newsletters in addition to news from my region. Sometimes getting there is the easy part, being there is a hoot. Sunny has been a SDPA member since September 2012. 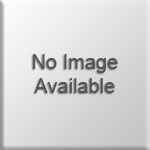 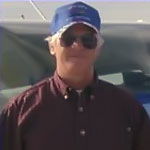 Steve earned his private pilot license in 1991 after about 3 months of training with Jacob Hoffner at Yankton. Over the past 20 years he has flown the same plane – Mr. Skyhawk – a 1975 Cessna 172M, which is based at Chan Gurney Airport. Memorable flights include flights to Alaska in 1999 and 2005, five flights to Tampa, FL, nine flights to Oshkosh / AirVenture, and numerous flights to Missouri and Mississippi – accumulating over 2,400 hours as of the end of 2015. Steve has served on the Yankton Airport Advisory Board for over 10 years. He is a member of AOPA, EAA, Yankton Regional Aviation Association (founded 1992), and Cessna Flyers Association. Steve retired in January 2004 after 29 years with the U.S. Department of the Interior as a researcher studying the effects of environmental contaminants on fishery resources (earned BS, MS, and PhD degrees). He has been the editor of the YRAA Fly-lines newsletter (1992 to present), the SDPA News newsletter, and established the SDPA web site in 2005 and maintained it to present. Steve earned the Gold Level Award in the FLY SD Airports! Passport Program in October 2012 and was inducted into the SD Aviation Hall of Fame in September 2014. Steve has been a member of the SDPA since January 1994.